Cauliflower | the 'white' green vegetable for your brain 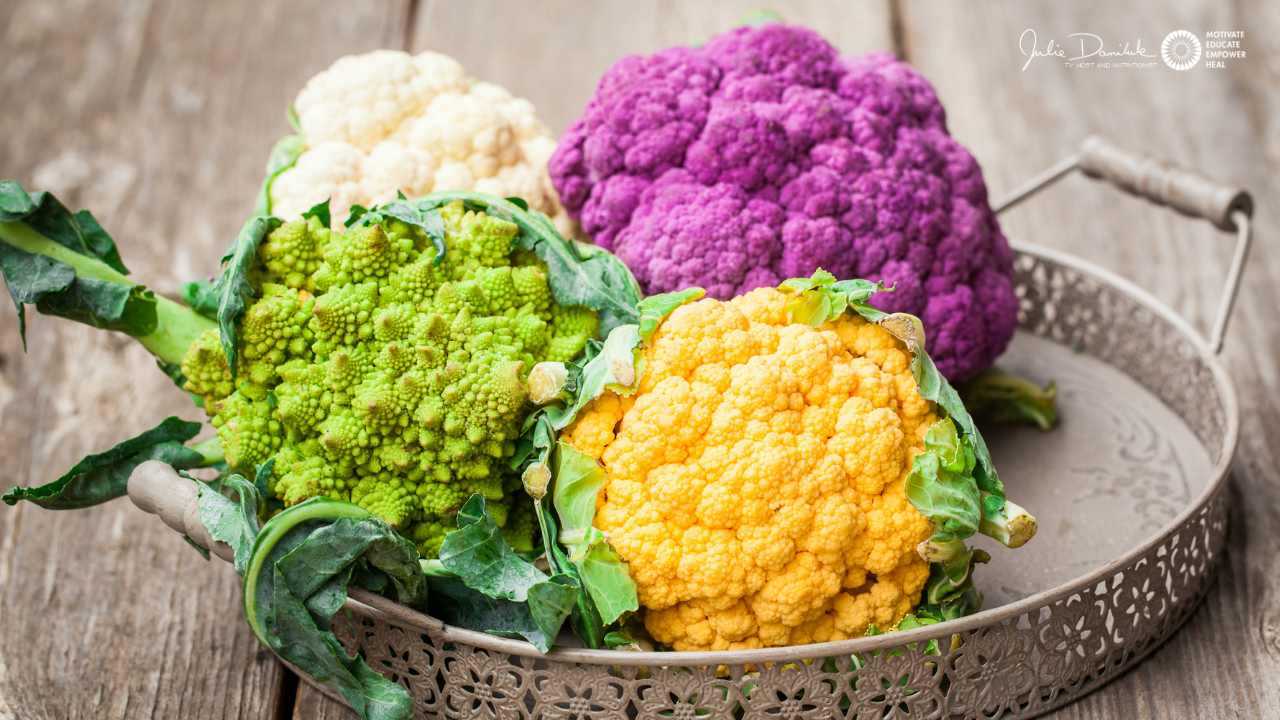 Something you hear a lot of these days (even from me) is, “don’t eat white foods,” or “avoid white bread, white pasta, white rice and white sugar.” And so, with your focus on eating a rainbow of veggies, it’s easy to lose sight of foods that are naturally white and incredibly good for you.

A great example is cauliflower. Most of us think of cauliflower as white though, if you look closely, you will see that the white variety is actually a very pale green! As a nutritionist, I love cauliflower for its nutritional value, and as a cook, I love that it is so versatile! It can be puréed for a dairy substitute in soup, whipped to mimic mashed potatoes, and made into pizza crust!

Even more exciting is the new appearance of cauliflower varieties in organic farmer’s markets! You can now find a variety of colourful cauliflowers ranging from yellow to orange to purple.

If you get a chance, try the cauliflower’s close cousin, the heritage Romanesco broccoli, which looks like cauliflower invented by a wonderfully creative, mad scientist!

Cauliflower contains a compound called sulforaphane that acts as an antibacterial agent for the bacteria Helicobacter pylori.1 This type of bacteria is found in the stomach and is one of the biggest causes of gastric ulcers, as well as being linked to stomach cancer. Sulforaphane has also been shown to kill bacteria that have become resistant to conventional antibiotics!

2. Cauliflower is great for the prostate.

In all of the vegetable kingdom, cauliflower contains one of the highest levels of the compound Indole-3-carbinol (I3C). In many studies, I3C has stopped the growth of cancerous cells in the prostate and caused cell death of existing cancer cells.

As a member of the cruciferous family, cauliflower has been shown in studies to decrease the occurrence of stroke.1 Cauliflower also has a high vitamin C content that combats free radical damage to the arteries and prevents the build-up of artery-clogging cholesterol, lowering the risk of heart attacks and strokes.

4. Cauliflower is an excellent source of vitamin K.

Vitamin K is known for its wonderful ability to boost bone strength. A study published in the American Journal of Clinical Nutrition shows a positive relationship between dietary vitamin K intake and bone mineral density (BMD) in women.2

Note: When on blood thinners, such as warfarin for cardiovascular disease, it’s important to balance your intake of vitamin K foods because they assist the body with blood clotting.3

Chewing on raw cauliflower releases a group of compounds, called glucosinolates, which inhibit the oxidization of benzopyrenes. Benzopyrenes are present in many types of meat that have been charred or cooked on high-temperature grills. When benzopyrenes are oxidized, this mutation creates cancer-causing compounds. So, be sure to serve a raw veggie platter that includes cauliflower at your next BBQ to combat this reaction!