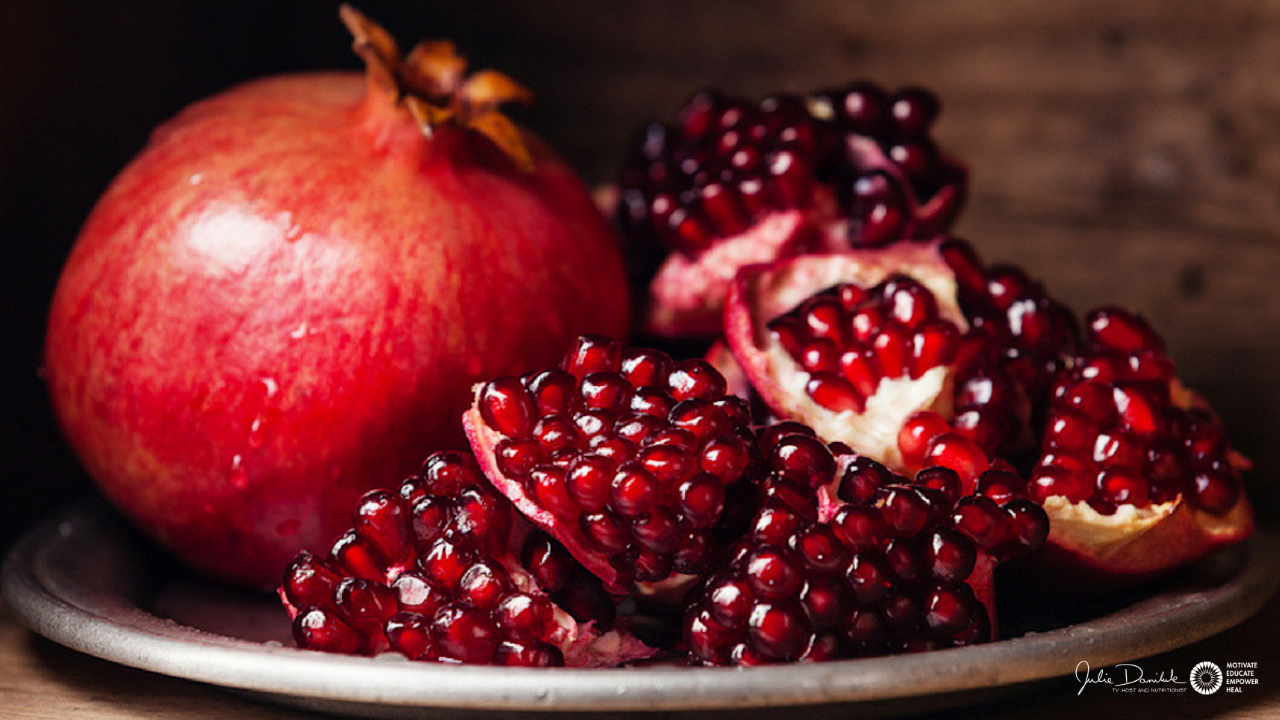 Many years ago, pomegranates were viewed as exotic fruit in North America. Like Mandarin oranges, they were precious imports brought over on ships for that once-a-year treat at Christmas and Hannukah. In recent years, as you might have noticed, the pomegranate has received the designation of “superfood” (foods with the highest nutritional values). Pomegranates truly are super with high dietary fibre, folate, potassium, copper, Vitamin C and Vitamin K. Since ancient times, these fabulous fleshy seeds have been used for fertility, though it turns out, they do so much more.

The greatest benefit of the pomegranate appears to be its ability to reduce different types of inflammation in the body.1 Pomegranates contain antioxidants, like polyphenols, tannins and anthocyannins, which effects removal of free radicals from your body cells. It also helps in repair of cells and boosts the immune system.

Pomegranate juice is among the super healthiest drinks of today. It is helpful in osteoarthritis and keeping your skin, and heart, healthy.

Note: Be aware that plastic-bottled juice will absorb the toxins from its packaging. Look for pomegranate juice in glass bottles.

Word of caution: Pomegranate juice appears to interfere with certain medications the same way that grapefruit juice does so, be certain and ask your doctor, if you're taking any prescriptions.

5 bold reasons to include pomegranate in your life…

In ancient Indian culture, this was the only remedy that was available for the treatment of malaria because of its powerful anti-parasitic properties.2 Remember to stock up on pomegranates before your next tropical  vacation to ward off those pesky parasites.

3. Pomegranates can be used as an anti-viral.

Protect yourself during winter months by stocking up on pomegranates. The anti-viral component of these fruits is so powerful that it is currently being studied as an alternative treatment for HIV (with promising results).2

Pomegranate flowers contain an oil, called oleanolic acid, that improves the metabolism of free triglycerides found in the blood.3 These triglycerides are what lead to the collection of LDL cholesterol and arterial wall blockages, thereby leading to atherosclerosis (hardening and narrowing of the artery walls) and increasing your susceptibility to heart disease.

For plaque to begin to form in your arteries, there first must be damage to your arterial walls (caused by free-radicals).4 Pomegranates contain powerful antioxidants that eat up these free radicals and target the lining of your blood vessels and prevent them from damage. The ultimate prevention food!